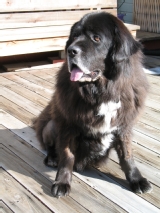 We had a wonderful experience with our interactions and pet's care at the UC Davis small animal medical facility.  Everyone was very professional and very heartfelt in their interactions with us and our pet, Bear.

We had discovered an unusual health issue with our then 11-year old Tibetan Mastiff.  After many tests and discussions with our regular veterinarian, we were recommended and sent to the UC Davis facility.

Bear had developed an artery/vein fistula in his right, rear lower leg area.  Dr. Culp and his team decided to take on the quest to correct this anomaly.  Dr. Culp spent many months investigating techniques, talking to colleagues and setting up a procedural plan.

In the end, a new and investigational procedure was discussed with us and mutually decided upon.  The execution of this was planned out thoroughly and a team of very skilled individuals was chosen to participate.  A procedure typically used in humans was to be conducted.  A liquid material would be injected into the problem area to seal it and force the blood to reroute through healthy tissues.  This procedure required detailed preparations as well as precision during the actual work.

This experimental technique was the least invasive to Bear's system and allowed him to return home with us the next day.  The procedure corrected the blood flow problem to Bear's leg and foot region and allowed it to function normally again.  In turn, this allowed Bear to regain his mobility and use the foot in a more normal fashion again.

We felt that we had a very positive experience and outcome for our pet.  We feel fortunate that such a great facility is close enough to our community to be able to access such professional and unique help. 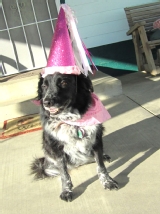 C-A-N-C-E-R, the word no one wants to hear. On March 11, 2010, my dog Molly was diagnosed with Transitional Cell Carcinoma (TCC or bladder cancer). As I watched Dr. Allen Kay glide the ultrasound probe over Molly’s abdomen, there was silence accompanied by that “look”. The look was enough to tell me it was not good, then came the word, CANCER. Dr. Kay showed me the walnut sized tumor on the ultrasound and told me that removal was not an option, due to the location. I was shocked and scared, but already had my hackles up and was ready to fight – no time for a pity party.

I called Animal Care Center (ACC) and was lucky to be able to get an appointment with Dr. Nancy Kay that same day. Prognosis; Poor…there likely is no cure. Molly would have 6 – 18 months depending on the chosen treatment option and how the cancer responded. Treatment started immediately, and Molly responded very well to the medications, but it only lasted about 4-5 months, and then the tumor began to grow again.

It was time to change chemotherapy drugs. Dr. Holly Burr was hired at ACC and became Molly’s Oncologist, and with her help, Molly made our first milestone, her 11th birthday in October…then Christmas, then my February birthday, then 1 year since diagnosis. She felt good, had plenty of energy, and was happy.

Something happens when you have a dog with bladder cancer – you become obsessed with their urine and urinating habits. How much? How often? How fast? What color? Molly thought I’d lost my mind, but I found that these observations are invaluable.

By August of 2011, Molly’s tumor had grown thickly down her urethra, making urinating nearly impossible, and my obsession paid off. We went to UC Davis where we met Dr. William Culp. He placed a urethral stent, and urine flowed in rivers! Dr. Bill’s stent saved Molly’s life, and preserved her quality of life. One week after the stent placement, Molly was joyfully doing a full agility course of 12 obstacles. Molly celebrated my birthday with me in February 2012. March 11, 2012 marked 2 years since diagnosis. Molly had some ups and downs over the next few months, but she never gave up.

After trying several chemotherapy drugs, my medical team and I decided to pursue alternative care with Dr. Lisa Pesch. Molly received weekly acupuncture, homeopathic remedies as needed, and herbals as tolerated. The tumor remained "static", no growth, but no shrinkage - I'll take that!

Molly passed her 13th birthday on October 30, 2012, then Christmas. On February 26, 2013, we made our final trip to UC Davis. After in depth conversation with both Dr. Bill and Dr. Carrie, who by now had become our dear friends, we decided it was time to let Molly go. I never wanted her to suffer or to be at death's door when the time came, but it was clear we had all done what we could, and Molly had fought a good long fight, with never a complaint. Molly had lost her battle with cancer. She was 2 weeks shy of living 3 years with TCC.

Molly passed away, head in my lap, eyes locked on mine as if to say "I will always love you and will never leave your side. Everything is going to be OK, Mom". She was surrounded by the love, hugs, tears, and sweet good byes from those who loved and cared for her - Dr. Bill Culp, Dr. Carrie Palm, and of course me. Dr. Bill wrapped her in a special blanket and gently carried and placed her in my car. He and Dr. Carrie gave me a big hug, and Molly a last kiss goodbye.

Molly loved life, and always savored every second of every day. She played Frisbee and keep away with her Jolly Ball right on up to just before she left us. She touched many lives and taught many lessons. My hope is that she will live on through those whose lives she touched, continuing to inspire, and continuing to teach. Molly is truly an inspiration and an example of how we should all live our lives.

When you meet Mick, the young 9 month old Australian Shepherd, he looks like the typical, exuberant dog. He’s running at great speed and abandon with the other puppies in the pack. Or he’s in the sheep arena, learning how to herd sheep, again with lots of energy and determination. Or he’s relaxing with his foster family in Berkeley, lounging on the bed with one of the teenage daughters or learning tricks that smart dogs always enjoy. This is what we expect from our herding dogs. Then you learn that when he was 6 months old, he was diagnosed with a life ending congenital defect, a liver shunt. The liver shunt causes the blood to bypass the liver and toxins then build up in the body, unable to be removed by the liver. If left untreated, the liver will atrophy and the dog will eventually die. So what caused this dramatic turnaround in young Mick’s life? The answer is cutting edge surgical techniques that are being perfected at the UC Davis Veterinary Medical Teaching Hospital by Dr. Bill Culp and his team of specialists. They use a combination of diagnostic procedures to identify the specifics of the liver shunt and then proceed with minimally invasive surgery to close off the shunt.

We had the great fortune of meeting Gracie at the East Bay SPCA in 2006.  Even as a tiny kitten, she displayed a mighty will which was surpassed only by the great joy she brought to our lives when she joined our family.  It wasn’t long before she took charge of the household.  She proved to be a benevolent ruler, friend & confidant.

On Friday morning December 2nd at the age of 5, we noticed she wasn’t herself.  She began vomiting and was in obvious discomfort.  By Friday afternoon she had been seen by our regular vet.  Thanks to quick testing and diagnostics by the staff at Hill’s Veterinary Hospital, the decision was made to send her to 24-hour emergency care Saturday morning.

The staff at the emergency hospital confirmed kidney issues and immediately began standard procedures.  The course of treatment was not producing results and a sonogram failed to reveal any blockages.  All indications pointed to massive kidney failure.  Gracie’s situation was becoming more critical by the hour.

Monday morning, Gracie was examined by the clinic’s lead doctor who concluded that her best chance would be transfer to the Veterinary Medical Teaching Hospital at UC Davis.  The staff at the emergency clinic handled the logistics and we set out from the San Francisco Bay Area.  Upon our arrival, we were greeted by an amazing team of medical professionals.

Great effort was made to involve us in all phases of Gracie’s diagnostic and treatment procedures.  Tests immediately revealed several key issues.  It was determined that one of Gracie’s kidneys was extremely undersized and of questionable function.   Sonograms revealed blockages in both ureters.  At this point her kidney failure was also causing her to retain fluids which was affecting her lungs and heart.

The situation was critical and Gracie needed to be stabilized by two dialysis sessions over a two-day period before corrective surgery could be considered.  We headed home to await the results.  When we couldn’t be at the hospital, doctors and veterinary medical students kept us informed with regular phone updates.  We can’t say how grateful we were for these communications!

When we got the call that Gracie had been stabilized enough for surgery, we were cautiously optimistic.  Optimism bordered on elation when Dr. Culp reported that he was able to successfully place a stent between Gracie’s good kidney and her bladder.  Now it was a waiting game to determine if her one good kidney would prove functional and if her system would return to normal.

Gracie spent another week at UC Davis VMTH, during which we continued to receive regular phone updates every day.  Gracie was released from the hospital on December 14th, but her post-operative care was far from over.

We would have to administer Gracie’s medications and nourishment every few hours through a feeding tube implanted in her neck.  The staff at UC Davis VMTH carefully tutored us in the necessary procedures, making us as confident as possible in our daunting responsibilities ahead.

When Gracie developed nausea that would not allow her to keep any food or medication down, the UC Davis doctors quickly arranged corrective treatment and medication in the Bay Area. There were more than a few anxious moments and we weren’t always certain we were up to the task, but we kept at it to the best of our ability.  The continued support & positive reinforcement from the UC Davis team really kept us going.  We were rewarded on Christmas day 2011 when Gracie took her first nibbles of food & sips of water on her own.  Best Christmas present ever!

We continued weekly follow-up visits to UC Davis VMTH for two months and everyone was thrilled with Gracie’s ongoing improvement.

Prior to our initial visit to UC Davis VMTH, Gracie’s prognosis was grave and she was given little chance of survival.  Following treatment at UC Davis VMTH, she is up to full strength and vigor and has reassumed her duties as head of household.  In our opinion, the incredible work performed by UC Davis VMTH doctors Dr. Carrie Palm and Dr. William Culp and their amazing support staff was nothing short of miraculous.  We will be eternally grateful for what they have done for our family!